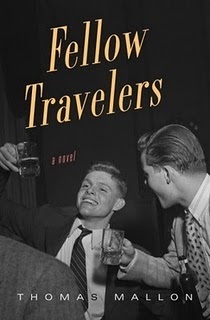 Mallon's most recent novel is Fellow Travelers, an account of a Washington D.C. love affair between Hawkins Fuller, a handsome State Department official, and young Timothy Laughlin, a fervent anti-communist and Senate staffer. Through Laughlin and Fuller, we witness the so-called lavender scare of the 1950s, in which State Department employees suspected of homosexuality were fired as security risks; and are given a ringside seat for the sordid endgame of the Army-McCarthy hearings run by notorious Wisconsin Senator Joseph McCarthy.

Littoral: Are Hawkins Fuller and Tim Laughlin based on real people in any way? Why did you choose to cast these characters in a well-documented era in Washington?

Thomas Mallon: Fuller and Laughlin aren't based on any particular historical figures. Both contain bits and pieces of people I've known in my own life, which makes them like the characters one finds being created by just about any novelist of the "non-historical" sort.
In this regard, though, one thing in particular interested me about Laughlin. When I started to make notes on him, the first thing I put down was "Date of birth: November 2, 1931"– exactly twenty years earlier than mine. I realized that in some ways I was going to be writing about what my own life might have been like had I been born two decades earlier.
As for putting him and Fuller into this well-documented era: in this respect, they fit in with a lot of the people in my novels– minor figures, invented or real (take Henry Rathbone and Clara Harris, from Henry and Clara), who get caught up in major historical dramas. The roles that Fuller and Laughlin play in actual events are sufficiently small that I don't think their presence on the scene disconcerts well-informed students of the period, the kind of readers who actually know, say, Charles Potter and the other members of the McCarthy committee. Even to such readers the presence of a staffer like Tim would seem believable.
In any case, this has become my preferred avenue into history– the plausible presence of a small person who's seeing big things.

L: How is Fellow Travelers different from your other work? Are the rumors of McCarthy's homosexuality given more credence in your novel than in the historical record?

TM: Fellow Travelers is different mostly, I guess, in terms of subject matter. (The basic method and techniques are pretty much the same.) My novels had often contained a lot of politics, but homosexuality hadn't before this one been more than a leitmotif (a couple of minor characters, like Frank Sherwood in Dewey Defeats Truman).
As for the McCarthy rumors: I suppose my book does give them more credence– or at least attention– than the historical record does, but there were certainly whisperings at the time about gay experiences McCarthy may have had from Wisconsin to the Wardman Park Hotel. His rather sudden marriage in middle age struck his detractors as suspicious.
It's often been suggested that Roy Cohn had some sort of hold of McCarthy, whereas Fellow Travelers invents a situation in which it's David Schine who has something on the senator. I don't, of course, know the true nature of McCarthy's sexuality. In the novel I portray him as somebody with a sloppy libido that's governed by alcohol. He's mostly homosexual but likely to grope anyone when he's had too much to drink.

L: In an essay you wrote in 1998, The Historical Novelist's Burden of Truth, you propose a theory for the popularity of historical fiction:
The cyber and fiber optic revolutions have made every person and place on the present-day globe absurdly and instantly accessible to every other person and place. We are, more than we yet realize, becoming sick of one another. The past is the only place to which we can get away, and if I had one prediction for the millennium it would be that all of us, including novelists, shall be spending a lot of time – more than ever before – looking backward.
How has the genre of historical fiction fared in the decade since you wrote this? Are we looking backward more than ever? Do you think we'll also tire of the past?

TM: I do think that what I predicted is being borne out, slowly but surely. Just look at the lineup you've got for January– and at what these writers have been producing in the last decade. And others besides them: consider the success of, say, Philip Roth's Plot Against America. Any literary vein can become exhausted, and this is hardly the dominant mode of the novel, but I would say that this movement toward literary historical fiction has hardly played itself out. The communications revolution– accelerating ever faster, making us email and text and IM about absolutely nothing– is on the whole proving destructive not just to articulacy but also to the imagination itself. Artists are going to be seeking an "out" from all this sterility, and the past is what will be available.