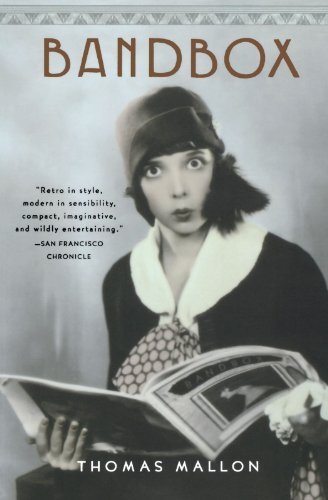 A 2004 Interview with the Atlantic Online:
"Jazz, Flappers, and Magazines"

A connoisseur of details and a consummate stylist, Mallon infuses his texts with the tone and rhythm of a given period, fluently transporting readers to a different place and time. An added "historical" dimension in Bandbox is Mallon's own experience in the magazine world—as GQ's literary editor and books columnist in the 1990s.


ATLANTIC: How did you come up with "Bandbox" as the name for the men's magazine in this novel?

MALLON: I was looking for a period word, a word that was suggestive of men's fashion from a long time ago. And I remembered the phrase "You look like you stepped out of a bandbox." My mother used it and I'd heard it other places, come across it in books. One of the epigraphs to the novel is from an old Somerset Maugham short story that uses that phrase. Harry Truman's daughter, I believe, used to say about her father, who had been, of course, a haberdasher, that he looked like he stepped out of a bandbox. The bonus, though, was that "bandbox" has a double meaning, which is actually why I put in a dictionary definition under the epigraph. It also means fragile, cheesy, silly. It's kind of an insulting word. I've seen the description "bandbox architecture." And I think Leslie Stephens, Virginia Woolf's father, talks somewhere about somebody having a "bandbox intellect," which you could probably crush with your hand, like those little balsa wood boxes that small articles of clothing were kept in. So the magazine's name is "Bandbox," and it's also a kind of bandbox in the sense that it's fragile and ephemeral.

ATLANTIC: Joe Harris, the editor in chief of Bandbox, is a dead ringer for Art Cooper, the longtime editor of GQ. And Jimmy Gordon brings to mind David Granger, who of course left for Esquire. To what degree did you want GQ and the people you worked with there to be recognizable in the novel?

MALLON: I plead guilty to the Art Cooper likeness. It was done with great affection. Art was wonderful to me when I was his literary editor and his books columnist. A couple of years ago, when he knew that I was writing the book, he immediately figured out what I was up to and he looked at me and said, "You do know that the only way I'll be mad is if people fail to recognize me." Which was very Art. And at one of his retirement parties, just several weeks before he died, he said to me, "Have them send me the galley. I want to blurb it!" Which was also very typical of him. But he never actually read it. I would say that Art was one of the most outsized characters I met in my life. He was this rich, juicy figure. He cried out for a novelist. But the truth is that everybody else in the book, all the other characters, are so mixed and matched and time-transported and composited and inflated ... The only thing that comes close to being a portrait in the book is Art, that's for sure. But it is true that I worked at GQ in the nineties, and David worked for Art and then he went to edit the rival publication. The two of them liked and admired each other, without question. There was obviously a competition going on in real life in the nineties, but the notion of this kind of zany, ludicrous feud with all of the sabotage and plots—that's all my doing and invention.

ATLANTIC: How did you have the idea to take this contemporary feud in the magazine world and set it in 1920s New York?

MALLON: I had really wanted to write about the twenties for a long time, because it seems to me the quintessential New York decade, somehow more New York than any other. My father left school at fourteen in 1928, the year the novel is set, and he went to work in publishing as an office boy. He used to tell me things about that time. So I did want to write about the twenties, and I did want to write about my improbable decade in the magazine business, which I never expected to have in my life. I was a contributor to magazines, but I had been an academic up until the time I was almost forty. When I left Vassar, I left a permanent position there for a job as Art's literary editor. It was a very improbable move. I loved—and I hope the novel reflects this—I just loved my time at Condé Nast. I had a ball. I loved the magazine. It was a rich experience for me, and I just knew that someday I wanted to write about it in some way. How the things came together—how a desire to write about the twenties got attached to this idea of writing about my time at the magazine—I can't honestly remember.

One of the things I discovered in the course of writing the book was how many parallels there were between the twenties and the nineties. The two decades had so much in common: that fast stock-market prosperity, which ultimately proved quite ephemeral; the worship of celebrity, which was a very twenties phenomenon, the twenties being the era of the ticker-tape parade, and the nineties being the era of the mad proliferation of gossip even in serious papers. The twenties were preoccupied with travel speed—everybody was always setting new records for air travel and things like that. The nineties were preoccupied with communication speed—the era of instant messaging. There was a wonderful sense of revival in New York in the nineties, that it was coming back in all kinds of ways.

MALLON: The language and pacing of Bandbox really capture the boisterous energy of the Roaring Twenties. What do you do to immerse yourself in the speech patterns and general rhythm of the time period that you're writing about?

I often tell people who want to write historical fiction: don't read all that much about the period you're writing about; read things from the period that you're writing about. There's a tendency to stoke up on a lot of biography and a lot of history, and not to actually get back to the original sources. I say, reverse the proportion, try to read more of the stuff that actually comes out of the time. I read twenties novels, listened to a lot of twenties music, often had it on while I was writing, which was a first. And I read the newspapers. For almost every novel I've written, I've read the daily newspaper of the time almost as if it were my current subscription. For Two Moons, which was set in 1877, I think I read just about every day of the Washington Evening Star for that year. For Henry and Clara, I read the Albany Evening Journal of the time. For Dewey Defeats Truman, I read the local paper in Owosso day after day on microfilm for 1948. To me, the newspaper is always the closest source that you can have.

In the case of Bandbox, you'd think that I would have read more magazines than newspapers since this is a novel about the magazine world. But I read the tabloid newspapers of the time because I knew this was a comic novel, it involved exaggeration. I did go back to The New York Times, but I read a lot of the Daily News from 1928, I read the New York Evening Graphic. I think some readers are going to think I made up that whole publication, because it seems so outrageous. But the Graphic really existed, and all those composite photographs really existed. Bernarr Macfadden, the publisher, is a real person. In fact there's a fellow in New York, Mark Adams, who's working on a biography of him right now. The Graphic is actually hard to get hold of. The New York Public Library has it on microfilm, but there are gaps in the issues. In its day, in the twenties, the public library wouldn't even subscribe to it, they didn't even want it in the reading room. It was considered too down-market and disreputable.